Last week, I’ve been enjoying the beautiful island that is Sao Miguel. It is the largest of the Azorean archipelago, which is an autonomous region of Portugal. With a total population of 140.000, spread over an island of 65 x 16km, you can imagine that the remote island isn’t very light polluted. The first night of my stay I decided to check out what the night sky looked like at the northern shore. My first image turned out quite great:

While in the picture above the Milky Way is only very faintly visible (vertically through the center), a picture of the southern sky shows our galactic center, hidden behind dark arms of dust: 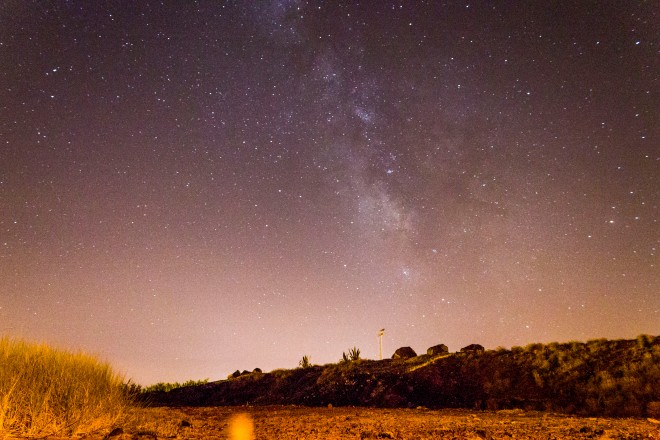 The Milky Way over Sao Miguel

Just left of the center lies the constellation Sagittarius, in a region that isn’t visible from the Netherlands. This part of the sky contains a lot of the most beautiful deep sky objects. To show you what I mean, let me point out just the most prominent ones visible in this image:

Awesome deep sky objects that I can’t see from here

Maybe, some day… I will be mad enough to travel south with my telescope to capture these objects, but that won’t be any time soon.

After a couple of tries (my girlfriend had to sit still for 20 seconds), I got this awesome image with M31, a double cluster, an iridium flare (satellite reflection) and a hyper active flag:

My girlfriend under the star-saturated night sky of Sao Miguel

After that night – as you can imagine – I was quite excited about the Azorean night sky and looked forward to taking multiple exposures at 80mm (for stacking). Sadly, there were too few cloudles nights. Eventually I took my camera out one more night, but it was too windy to make proper photos at high magnification (camera movement due to wind becomes too prominent). But at 18mm focal length the photos seemed alright, so I took some final nightscape photos:

The Milky Way over Sao Miguel (glow above the center hills is from the city, Ponta Delgada) 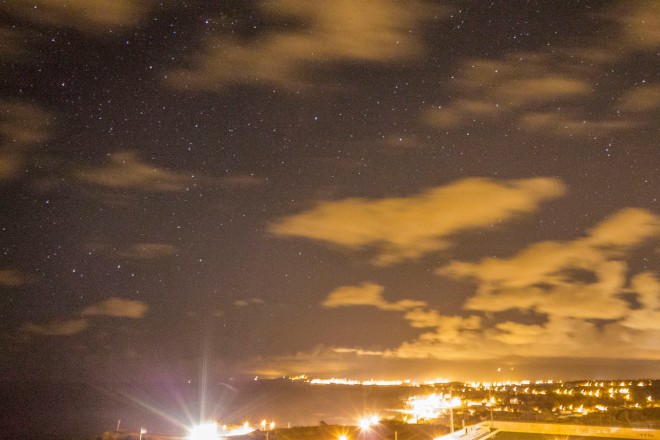 Northern shoreline of Sao Miguel at night. The bright lights in the lower left are headlights.

As you can see, clouds and wind made photography tricky (zoom in on the last image and notice that all stars are double due to camera shake). Nevertheless, the Azorean night sky was stunning at times. It’s not just at night that Sao Miguel looks beautiful, but also during daytime. Photos of that will be posted here somewhere in the next couple of days. So stay tuned! 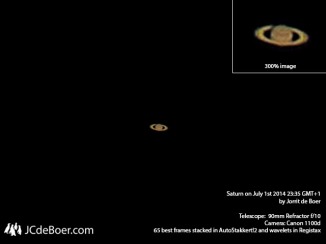